European economies: Will political risk spoil the party in 2017?

The question induced by this faster political tempo is simple: will economic growth withstand the pace? Indeed, growth could be affected in various ways by increased political uncertainty: delayed investment and corporate spending decisions, a drop in household confidence, a downturn on equities markets and the increase in bond rates taking a toll on financing terms for economic agents, as well as a lack of reforms and a freeze on public spending in the event of a government vacuum. While it is easy to enumerate these transmission channels, it is far more difficult to quantify the impact of this political uncertainty on growth. This is what we attempt to do here.

After measuring political risk in 14 countries in western Europe by taking into account risk indicators specific to the region (rising euroscepticism, anti-immigration sentiment and a fragmentation of political scenes), we have built an econometric model aimed at measuring the impact of an increase in political uncertainty on GDP growth in five countries: Germany, the UK, France, Italy and Spain. This indicates that the increase in political risk noted since the crisis has dented growth by 0.2 points on average, the impact on investment (0.5 points) being higher than that on household consumption (0.1 points). Nevertheless, this average masks clear differences, growth in the UK (0.3 points), France (0.4) and Spain (0.3) being more affected by political risk than in Italy and Germany. In the event that these last four countries suffer a rise in political uncertainty like that seen in the UK at the time of the referendum in June, their growth would be dented by around 0.5 points on average.

Eventually, it is difficult to speak of political uncertainty without mentioning the US in these last months of 2016. Our model shows a significant impact on the US economy by a shock in political uncertainty to a similar extent of that seen with the UK referendum (1.5 points). The impact on European economies would be even worse, thereby confirming the systemic role of the US economy 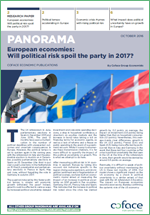 Infographics - Is political risk a new threat for the global economy?