The year 2014 was finally one without a major disaster. After years of recession and ongoing difficulties, the development was positive. There is finally an improvement – not as strong as economists hoped for, but stable. Global growth in 2014 was a modest 3.4%, reflecting a pickup in growth in advanced economies relative to the previous year and a slowdown in emerging market and developing economies. The Eurozone – the most important trading partner for most countries in CEE – increased by 0.8%.

The worldwide improvement was reflected in the CEE region as well. The average GDP growth was 2.5% in 2014 – nearly double the rate of 2013 (1.3%). Lower unemployment rates, rising wages, the support of low inflation and falling oil prices all contributed positively and made household consumption the main growth-accelerating factor in most CEE economies.

The CEE Top 500 ranks the 500 biggest companies in the region by turnover. Those top players increased their revenues by 2.1% to almost 572 billion EUR.
The positive economic development was reflected in declining unemployment rates in the region. This was mirrored by the Top 500 players as well as they increased their staff by 1.7%. Overall 4.2% of the total labour force in the region is employed by the companies of the CEE Top 500.
The upward trend was recorded by the majority of the sectors in the CEE Top 500 as well. Nine out of 13 sectors increased their turnover in comparison to the previous year. The highest rise was achieved by «textiles, leather & clothing» with +29.4%. On the other hand the oil and gas companies struggled with prices that halved in 2014 and have to face difficult circumstances in 2015 as well.
The forecast for the CEE region in 2015 is slightly better than for 2014 with an estimated average growth rate of 2.8%. Most economies will benefit from rebounding household consumption and a gradual recovery of the crucial export destination Eurozone. Nevertheless, challenges on both domestic and external sides are a constraint for the sustainable improvement of the region. 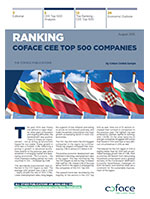