RMB depreciation, capital flow measures and new monetary stance - What are the implications for Chinese corporates?

The potential depreciation of the renminbi (RMB), along with the implementation of capital flow measures, are longstanding concerns for China. More recently, the country’s new monetary policy stance of being “prudent and neutral”, announced at the beginning of the year, and reiterated during the National People’s Congress, has been attracting attention. This Focus aims to provide some insight into these three aspects and examine their implications for Chinese corporates.

A longstanding uncertainty: Downward pressure on the Renminbi persists, and it’s time to focus on the RMB’s indices On Aug 11, 2015, the People’s Bank of China (PBoC) released a statement on “Improving the quotation mechanism of central parity between the renminbi (RMB) against the US dollar (USD)”, while simultaneously setting the onshore RMB fixing rate 1.8% weaker against the USD. This triggered expectations of a depreciation of the RMB. Since then, China’s foreign exchange (FX) reserves have been declining almost monthly, falling to USD 3.01 trillion at the end of 2016 (Chart 1). Yi Gang, the PBoC’s Deputy Governor, confirmed its use of FX reserves to protect the RMB against depreciation1 . Nevertheless, despite this intervention by the PBoC, the RMB fell by 12.2% - down from 6.21 on Aug 10, 2015, to a low of 6.96 to the USD on Jan 3, 2017. It then recovered to 6.87 against the dollar, as at Feb 24, 2017. The RMB was found to be overvalued by 0.7% in a analysis by Cline (2016). 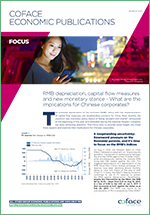 What are the implications for Chinese corporates?"