Gulf Cooperation Council Countries -i.e. Bahrain, Kuwait, Oman, Qatar, Saudi Arabia and the United Arab Emirates control around 30% of global oil reserves. According to the British Petroleum (BP) Statistical Review of World Energy 2015, the Middle East holds 47.7% of the world’s proven oil reserves, with Saudi Arabia in the lead (15.7%), followed by Iran (9.3%), Iraq (8.8%), Kuwait (6%) and the United Arab Emirates (5.8%). Together they produced 28.6 million barrels per day in 2014, equivalent to 32.3% of total global production.

Lower oil prices therefore aect all GCC countries, but the magnitude of the shock varies from one country to another and indeed GCC countries have dierent break even prices for oil. Oman and Bahrain appear to have the economies the most exposed to the impact of the decline in oil prices, while the

They have also developed manufacturing and service industries, allowing them to mitigate their dependence on oïl revenues.

The first part of this panorama seeks to explain the impact of lower oil prices on the economic outlook, with a focus on Saudi Arabia, the UAE and Bahrain. The second chapter of this report examines diversification strategies and the region’s integration with international trade and the last chapter focuses on the food and beverage sector in the UAE and the automotive sector in Saudi Arabia. 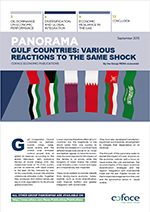