Company insolvencies in France: a further fall in 2017

The number of insolvencies in France continued to fall in the twelve months to end-October 2016 (-1.0%). This good news should be confirmed for the whole year: Coface anticipates a fall of 3.8% in 2016. This positive figure is due to companies’ ability to withstand weak growth. Thanks to a recovery in margins (32% of added value for non-financial companies forecast in 2016), they may register a slowdown in activity, like that observed since the second quarter. As in 2016, company investment is expected to make little progress in 2017, partly owing to uncertainties relating to the presidential elections. Saving invested capital will at least be beneficial to companies in the short term. They will therefore see another year of declining insolvencies in 2017 (-1.0%).

While the results are encouraging overall, there are some disparities. Four sectors are considerably more loss-making than a year ago: clothing, agrofood, transport and personal services. Conversely, the situation is encouraging in construction, which confirmed its downtrend in insolvencies in 2016. At regional level, Ile-de- France continues to generate more insolvencies than the national average. Several explanations for this have been put forward: the effect of the terrorist attacks or a natural consequence of the uberisation of the economy (see Coface panorama of December 2016), which first and foremost affects this region. 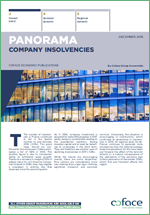 
Uberisation of French economy: a positive impact on employment but will it last?

Uberisation of the economy in France: a new weapon of mass creative destruction?