payment periods are lengthening, while domestic economy is slowing down

The Moroccan economy is slowing but demand and investment resist

Morocco’s growth rate has slowed in 2016, after recording an increase of close to 4.5% in 2015. The drop of over 70% in cereal production, between 2015 and 2016, is likely to limit the country's GDP to a growth rate of close to just 2% this year. This slowdown appears in the first quarter and continued in the second quarter, with an annualised growth rate of 1.4%. However, while agricultural added value contracted, non-agricultural added value increased by 2.5% in both the first and second quarters of 2016.

As in 2015, Coface surveyed 208 Moroccan companies on payment behaviour and general trends. Results from the survey reveal that Moroccan companies are sensing a slowdown in the domestic economy. Over half of the companies surveyed (55%) perceive a stagnation in activity and 28% a deterioration in the business climate where 39% were expecting a positive developments in activity during 2015 survey.

Demand continues to play its role as a driving force for activity. Household consumption grew by 2.7% in the first quarter of 2016 (2.3% in 2015) and then fell slightly in the second quarter.
Investment should increase by 5%, year-on-year, in 2016. This trend is also observable trough the survey, as 52% intend to invest.

The agricultural sector continued to show a significant decline, down by 12.1% in the second quarter of 2016, following a drop of 9% in the first quarter. Unfavourable weather conditions led to a 70% fall in cereal production, which was only partially offset by the rise in industrial and vegetable farm production. However, thanks to a good performance by the fishing segment, the decline in agricultural GDP was limited.

Manufacturing and extractive industries picked up slightly in the second quarter of 2016, up by 3.2%, following a 2.9% rise in the first quarter. This positive movement can mainly be attributed to improved performances in the agro-food, mechanical and chemical industries.

Service sectors posted a growth rate of 2% in the first quarter of 2016, improving on the 0.9% recorded for the same period in 2015. With the exception of services linked to financial activities and insurance (which declined by 0.3%), other tertiary activity sectors generated positive growth.

In 2015, more than 30% of the survey’s respondents received payments between 30 to 60 days from the issue of their invoices. This percentage of respondents has decreased to 24% this year.

The number of companies declaring payment periods in excess of 90 days has increased, especially for those in the public sector.

Private-sector companies in Morocco are showing greater stability, as payment periods remain constant for 48% of the sample. Nevertheless, the percentage of companies that perceive an improvement in payment behaviour is down markedly. The survey also revealed that companies with the longest payment periods are those that most perceive a stagnation in activity. The percentage of these companies rose to 55% of the sample in 2016, up from 40.3% in 2015.

The trade and retailing sector has also suffered from prolonged delays in payments, with a 23% increase in the number of companies reporting average payment periods of more than 120 days.

While payment periods show deterioration, we note an improvement in the number of days of delays. The increase in the percentage of delays of less than 30 days could be explained by the entry into force of legislation (decided in 2014) concerning payment periods. As regards delays by size of companies, large companies tend to accumulate longer periods of delays. By sector, companies in the construction and business services segments report the greatest delays in terms of days.

During the study, Coface analysed the impact of overdue accounts on the financial health and future prospects of companies. The shorter the delay periods experienced by companies, the greater the improvement in their cash situations. Likewise, the cash situation of companies reporting delays in excess of 30 days has deteriorated. Finally, cashflow forecasts remain stable for a number of companies, regardless of delays. This could mean that companies are taking into account the payment behaviour of their clients and making provisions for possible delays in their cashflow forecasts.

Late payments, as well as extensions of payment periods, reduce the capacity of companies to invest. When companies were questioned on the reasons preventing them from investing, those reporting the highest delays pointed to financing problems. Those whose average delays are between 30 to 60 days cited poor economic prospects as the main factor. 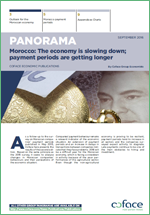